Designing the ‘murder of Duncan’ level

This project was funded as one of 30 pilots under the AHRC’s Digital Transformations programme. It developed an authoring tool for young people to use to make computer games based on Macbeth. It was a collaboration between the DARE research centre at the UCL Institute of Education, Shakespeare’s Globe, Immersive Education Ltd, and Coleridge Community College in Cambridge, a campus of Parkside Federation Academies.

Why make computer games of Shakespeare plays? For three reasons. Firstly, like any production of the plays in theatre or film, it raises questions of interpretation: how to visualise the play, how to use the dramatic text, how to dramatise the actions and events. Secondly, it challenges our conventional thinking about the narratives: games ask questions, offer choices, pose puzzles, set challenges, rather than simply making narrative ‘statements’. Thirdly, games are an art form and entertainment medium familiar to young people, offering a bridge between their cultural worlds and that of the Shakespearean canon.

The project involved creating new features for Immersive Education’s successful Missionmaker game-authoring software. Seven 13-yearolds from Coleridge Community College made four levels of a game leading up to the murder of Duncan.

The games were demonstrated by the young people at a seminar at the Globe, attended by researchers, Globe education staff, and the project’s advisory panel.

The collaboration with The Globe, planned as part of the project, allowed for expert advice on the content of the game: how it would adapt the play, and what elements would need to be incorporated, such as the script, key imagery, and psychological features of the characters. 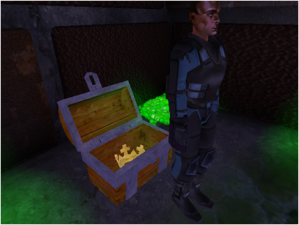 Screen grab from the Lady Macbeth ‘sewers of the mind’ level

The collaboration with Immersive Education built on an earlier ESRC project, part of the PACCIT-link programme, in which the original software was developed. In that project, Making Games, the aim was to make a software with which young people could learn how to make computer games, and gain a critical understanding of their structures. Here, the aim was different: to understand how a canonical literary text could be adapted as a game. The benefits of this were not only a deeper understanding of the play, but a new kind of understanding: one which used the ludic elements of games (puzzles, challenges, obstacles and rewards, win-lose states, rules and economies) to cast a new light on the plays.

The collaboration with Coleridge Community College also built on a successful earlier relationship. This is a longstanding partnership of research and classroom practice, evolving a complex and sustained development on innovative work in the related fields of media, English and drama education. This project explored a new dimension of that work, in demonstrating how classical literary texts can be newly-understood through games.

In practical terms, we added characters from Macbeth, daggers, blood, ‘dying’ animations, and the text of a selection of scenes to the software, to enable the students to make games specifically based on Macbeth. In the original proposal, The Tempest was envisaged as the chosen text: however, the project’s advisory group felt that Macbeth would be more suitable, and contained many ‘game-like’ elements which could be built on.

In developing their game levels, the students created missions (get past the guards, kill the king, leave the daggers); but also used the game to explore the psychology of the play. They created ‘economies’: quantified representations of qualities such as ambition, conscience, fear, greed and guilt; and one level used green corridors to represent ‘the sewers of Lady Macbeth’s mind’.

The project demonstrated, then, that games are good at creating action-based narratives; but also that they can represent metaphor, emotion and motive. They also reveal that Shakespeare’s plays contain more game-like structures than we might suppose.

In conducting this work, we addressed the Digital Transformation themes as our proposal envisaged. In relation to the Text: Authority and Power theme, we found, as we expected, that the medium of computer games did indeed subvert the ‘fossilizing’ effects of the literary canon, and especially the Shakespearean canon, liberating the study of the play in the classroom from an overemphasis on linguistic and literary structures, and from the negative effects of cultural distance and the weight of heritage.

In relation to the theme of The Creative and Performing Arts and Technology, we found, again as we had expected, that games offered a performative medium with many analogies to drama. The avatar-based narrative developed affective qualities such as suspense, fear

Answering questions at the Globe seminar

and shock. The game economies, which the students were able to freely label and manipulate, represented the character’s motivations (greed, ambition, guilt, conscience, bloodthirstiness). The options for incorporating the text of the play (to select pre-recorded speech spoken by professional actors, or to record their own voices), produced effective vocal representations of the characters, including Macbeth, Lady Macbeth, the guards, Duncan and the witches. Finally, the first-person nature of the player-character allowed the play experience to be focused on different characters, so that the player ‘became’ Lady Macbeth in one level, Macbeth in the next.

The project fulfilled our general sense of what Digital Transformations might be: in this case, how computer games might offer innovative ways to approach a corpus of work weighed down by the history of cultural heritage. However, it also produced some surprises, both about how young people use game-authoring creatively and about what games could do with qualities such as emotion and psychology. In short, we were surprised that the teenagers used the technology of game development to produce emotion, metaphor and play with narrative temporality. These are hopeful developments in terms of how games might offer new ways to think about, transform and recreate the literary canon.

The project also demonstrated how researchers, developers and cultural institutions can work together effectively with schools, to create something which is a new technology, a cultural intervention, and an innovative pedagogy. This offers new ways for heritage institutions such as The Globe to engage with young people’s cultural worlds, for educational software developers to sustain their viability in a difficult and competitive market, and for schools to use new media to connect with literary culture.

Here’s a video of one of the levels, in which the player plays Macbeth murdering Duncan. It’s designed by the two 13-year-old girls you can see at the top of this post.

We are developing plans to develop the software still further, to explore the Shakespearean corpus further, and possibly other suitable classics of English literature, such as Malory’s Morte d’Arthur, Paradise Lost and the Ancient Mariner.

The dissemination and outreach plans were built into the project from the start, mainly through our Advisory panel. This included academic specialists in Drama (Dr Anton Franks), Music (Dr Evangelos Himonides), games (Dr Diane Carr), Media (Dr John Potter) and ICT in education (Lynn Roberts), as well as publishers (Sarah Stanton, Cambridge University Press). These contributed to the development of the project, and also attended the dissemination seminar held at the Globe, along with representatives of the London Knowledge Lab and the AHRC. A particularly successful feature of this dissemination event was the performance of the young people, who not only demonstrated their games, but commented extensively on them, and answered questions at length. The Head of Learning at The Globe, Georghia Ellinas, commented: “It was a very successful event – the students were superb and really inspired the participants”.

In addition, we organised an event showcasing the students’ games as an art form. This was presented at the BFI’s southbank centre as part of the Inside Out festival organised by The Culture Capital Exchange. We expect a good mixed audience of academics from TCCE’s university membership, software developers and educators.

The project is showcased as a case study in the AHRC’s Digital Transformations programme.

The game-authoring tool is being further developed on the popular Unity engine by MAGiCAL projects, an enterprise of the London Knowledge Lab and DARE, which has acquired the assets of Immersive Education.