Young game-designers had the chance to make their own games using the programming system and visual assets of Missionmaker during Game City’s halfterm workshops at the National Videogame Arcade in Nottingham. The workshop was part of the Playing Beowulf project, and was led by Alison Gazzard, Abel Drew and Andrew Burn.

The workshop had capacity for five participants, and was fully booked. Here’s Abel Drew working with one of the young designers, Aaron. 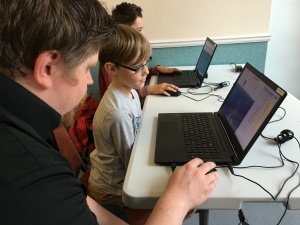 And here’s Aaron developing his game level later in the workshop. Finally, here’s Aaron’s completed game captured as a video sequence. It shows the player, as Beowulf, being given the mission to find the dragon by the voice of Hrothgar, the king, and moving on to encounter an armed warrior standing in his way, and then finding and killing the dragon. Aaron had worked on visual programming software before, and told us about his use of Hopscotch, so he quickly picked up the rule-making system of Missionmaker to program the events in his game. He only had two hours to make it, so it’s quite brief – but he had ambitious ideas about how to extend it, suggesting adding a female dragon, the dragon’s mother, based on the fact that Grendel has a mother; and also showing the death of Beowulf at the end of the poem and offering a second player the chance to play Wiglaf and gain the crown. The research team was particularly impressed with his knowledge of Beowulf, which his class had worked on in primary school last year.

The other thing which interested us, since the relation between drama and games is a theme of our project, was Aaron’s voice-acting of the characters. He readily adopted an appropriate voice for Hrothgar and the armed warrior, and improvised their messages to the player.