For around a decade of his life until 1803, the renowned English philosopher and reformer, Jeremy Bentham (1748–1832) lobbied the British government to build a ‘panopticon’ prison of his design. Bentham had envisaged an ‘Inspection House’—a circular building with the prisoners’ cells arranged around the outer wall and an inspection tower at the centre, from which the prison inspector could look into the cells at any time, though the inmates would be unable to see the inspector. The prisoners would have to assume that they were being watched, and Bentham expected that they would thus modify their behaviour in a positive manner in order to avoid the additional punishment which would inevitably follow for breaching the prison’s discipline. 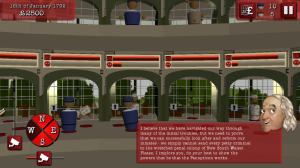 The failure of the panopticon scheme was a crushing blow and the greatest disappointment of Bentham’s life. No prison which adhered to Bentham’s design has ever been built, and Panopticon Pandemonium sees the construction—virtually—of a working panopticon for the first time. The player, assisted by Bentham himself, acts as governor of the prison and has to balance economies of the social benefits of Bentham’s vision—happiness, rehabilitation, work—against the functions of discipline, punishment, and surveillance, while also ensuring that their panopticon is orderly and profitable. These conflicting functions, rooted in Bentham’s writings, are realised as game mechanics with the player managing economies of work and nutrition, the recruitment and deployment of staff, coping with riotous prisoners, and ensuring that visiting dignitaries come away from the Panopticon with a favourable impression. Fail in the task and prisoners will instead be transported to New South Wales!

Based in large part on Bentham’s published works and unpublished manuscripts being explored by volunteers for UCL’s award-winning Transcribe Bentham initiative, Panopticon Pandemonium will provide players with fresh insights into one of the most controversial aspects of Bentham’s thought. To find out more about Bentham, visit the Bentham Project website.

The development of Panopticon Pandemonium was funded by the UCL Grand Challenges Small Grant Activities scheme. It was developed by Duck Duck Zeus, in association with the UCL Bentham Project, DARE Collaborative, the UCL Knowledge Lab, and the UCL Centre for Digital Humanities.